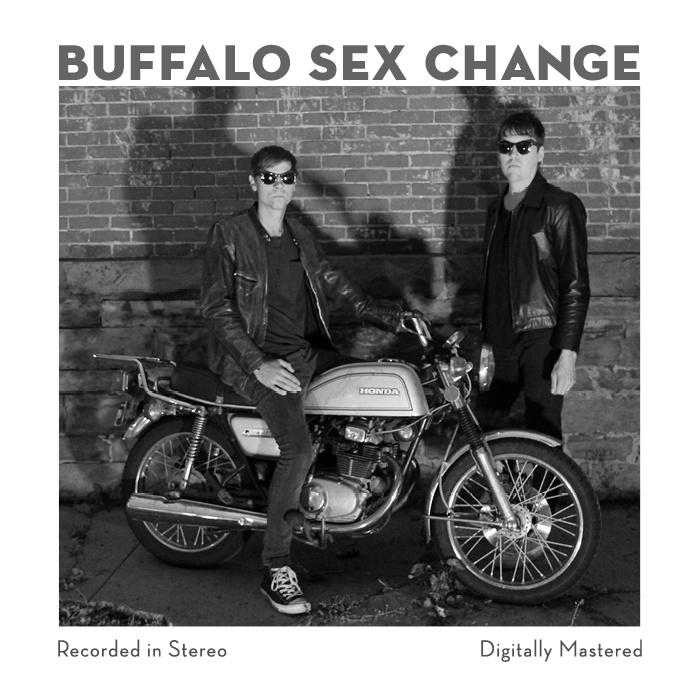 When I first heard of Rochester garage post-punk band Buffalo Sex Change and their self-titled, debut album, my initial reaction was mostly just trying to figure out their highly specific and provocative name. Fairly early into the album, however, I was having a hard time imagining the two-piece being referred to as anything else. With a gritty lo-fi drums, androgynous sounding vocals, and a distorted guitar sound that can only be described as dark and dirty, the band explores music rooted in a liminal phase, never quite clear of itself. And yet, the general mood of the record comes off confident, as if the members are aware of and quite comfortable with their own liminality.

With only two members, BSS does well with filling in the space of sound, particularly with Phil Pierce’s guitar playing, which switches from Buddy Holly licks  in “Gender Unknown” to early Jesus & Mary Chain/Kevin Shields influenced guitar layering in tracks like “Born Again.” Always constant, though, is the vibrato, tremolo, and note bending tone that characterizes Pierce’s (and ultimately the band’s) musical style. Yet sometimes the guitar drifts in and out of prevalence, causing some songs to become uninteresting or easily forgettable. When a song is backed tastefully by full guitar chords and catchy riffs, however, it shines. Contrast a tune like “All of You,” (which has arguably one of the tastiest riffs on the album), with “Emily Go,” which doesn’t have enough melody or texture to support the pop song structure.

Another equally important characteristic of the album is the vocals, shared by both Pierce and drummer Clayton Eddy, which give the band their more alluring punk stylings. Much like Lou Reed and Iggy Pop put a spin on rock or punk song formulas while still paying homage to the roots, BSS does something similar in regards to rock n’ roll and R&B, hinting at slight nuances of both genres while changing the way those usual nuances are expressed. The vocals also had another layer of melody to each song, which can often be subtle enough to go unnoticed, but also assist in pushing the twisted rock n’ roll theme present throughout. Without the in your face sharpness of the vocals, the guitar would overpower everything else. And nobody wants to hear guitar music anymore, believe you me.

For an album that sounds dirty and lo-fi, there is a clarity to the production that suits it well. Yet a band of only two, the sound is full and not artificially boosted by too many overdubs or effects. For a debut, the band has already demonstrated a solid understanding of their own sound and musical themes, which probably explains the album’s level of attention and praise it has already received. Buffalo Sex Change is sexy while being brooding, but buried underneath the fuzz there are smartly written and well performed songs as well.