buffaBLOG’s Songs of the Summer 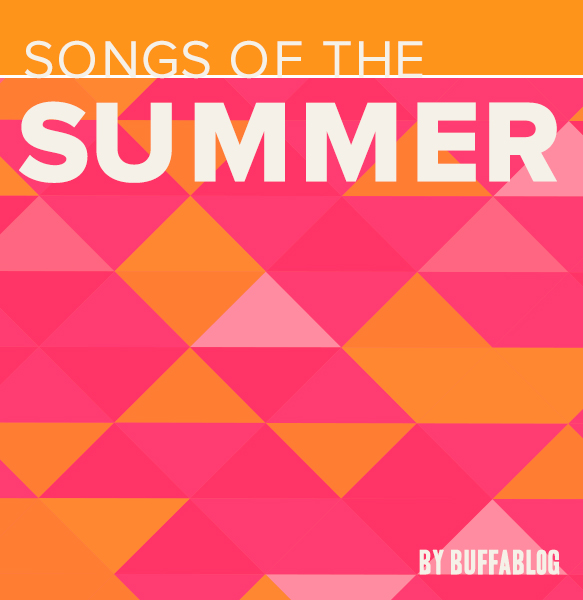 Labor Day has passed us, football has begun, and pumpkin ales are steadily flowing. All of those are signs that fall has pretty much arrived and summer will soon be a distant memory. While fall in Buffalo is a thing of beauty, its never fun to think about what will be awaiting us in a few months. So, while we still can, lets look back at summer and the music that helped shape our staff’s sunny season.

Nick Sessanna
Alvvays – “Archie, Marry Me”
Imagine my surprise to learn that my pick for song of the summer was from a band whose roots lie further north than us. Toronto’s Alvvays hit blissed-out gold this summer with “Archie, Marry Me,” a charming love song that somehow succeeds at rhyming “matrimony” and “alimony” without even being a little pretentious. With a video full of nautical scenes and sunny weddings (doused in grainy vintage filters of course), these particular Canadians had me fooled for Californians. And although Alvvays doesn’t stray from the path too much, this is tried-and-true beach pop at its finest. You can bet I’ll cue this song up and shed a single, summery tear come October.

Mac McGuire
Foxygen – “How Can You Really”
I’ll be honest. Foxygen’s We Are the 21st Century Ambassadors of Peace & Magic did next to nothing for me. All of the right elements were there for me to love that album, but it just felt trite. Then, earlier last month, the California duo debuted its new single, “How Can You Really,” and I can finally say I am listening to Foxygen. Frontman Sam France sings about loveless relationships (maybe even a summer love?), while delivering a  chorus can’t get out of his mouth fast enough. With just the right amount of jaunty keys and horns back the exuberantly sunny number, the song feels like a freewheelin’ cousin to Ariel Pink’s “Round and Round” (only my favorite song of the last decade if I haven’t already told you). “How Can You Really” is set to be included on the bands forthcoming 24 song (!), 82 minute (!) album, …And The Star Power (10/14).

Sarah Machajewski
J. Roddy Walston & The Business – “Take It As It Comes”
What does it take for a song to break out of the pack of the many songs released in late spring and claim the coveted “song of summer” title? There’s no magic formula, though songs of summer are usually happy, ear-wormy, and easy to listen to. “Take It As It Comes” by J. Roddy Walston & The Business is all three of those things…and it was also on every soft rock/easy listening/lite alternative station this summer. Whether it was the soundtrack to your trip out on the boat, the unoffensive tune blaring out of a speaker in half-empty bar on a lazy day, or the background noise to some beers in the backyard with your friends, this song set an upbeat, carefree tone to your summer activity of choice. And it was always on, either on the radio or stuck in your head. When it is still stuck in your head a couple months from now, long after summer has passed, it will evoke images of sunny days outside, when nothing really mattered except for something cold in your hand and something pleasing to your ears.

Mat Polowitz
Greensky Bluegrass – “Windshield”
In preparation for their impending album release and a subsequent visit to Town Ballroom the night after, I figured it couldn’t be a more perfect time to come clean about how many times this song has appeared in my Spotify queue over the past few weeks. With a driving melody that picks up momentum as each instrument layers into the mix, the songwriting comes alive through the intense crescendo of Paul Hoffman’s brooding vocals. Add some dobro on top and you’ve got yourself a tune. Though it may prove more lamenting than some of the other tunes on this list, it’s a song that points to the nostalgia of good times already had, another summer come and gone.

Vanessa Lynne
The War on Drugs – “Red Eyes”
For a lot of people, this was the summer of getting “Fancy,” being “Rude,” or feeling “Happy,” but if you weren’t turning down for what with Lil Jon, you were probably in the throes of summertime sadness. SS is a strange and somewhat rare disorder that can turn the season from a sun-and-fun-filled permanent weekend to an excuse to lay in bed and watch Netflix on your crumb-covered sheets while piles of takeout boxes and empty cans of Diet Coke gather bedside.

I stumbled onto The War On Drugs’ single “Red Eyes” in late spring, when summer was just a glimmer on the polar vortex horizon, and sweaters were still an essential part of any outfit. Heartbreak, mixed with desire to attempt to put it back together is the theme of this track, and you don’t know if the red eyes are tear or tree induced. The hazy vocals, combined with sweetly sad synths/piano/acoustic guitar make for a perfect song to listen to when you want to feel something, but aren’t ready or able to do anything about it.

After playing the song on repeat for weeks, I kind of forgot about the track until, lounging poolside at a beach club, it came piping out of the speakers, nearly drowned out by screaming kids and drunk parents arguing over whose turn it was to deal with them. I was instantly brought back to the first time I heard it, and the hopeful yet melancholy feelings it conjured. Suddenly, my summertime sadness didn’t seem so sad, and the vacation memory I just made and would always have was more comforting than any Netflix marathon.

Michael Moretti
Sea Planes – “Right Now”
Rochester electro-pop two piece, Sea Planes, have been been on our radar just over a year. The project took a yearlong absence after releasing their debut track “Lip Gloss,” which made a spot in our top ten songs out of Rochester in 2013. Sea Planes came back with a jam last May with the track “Young at Heart,” which definitely filled our need for quality electro-pop out of the 585 ever since JOYWAVE’s nationwide schmoozing. With that being said, Sea Planes followup single, “Right Now,” is absolutely blissful, combining 80’s tinged instrumentation with a chorus and delivery of an XMU mega-hit.

Jeannette Chin
Jessie Ware – “Tough Love”
Jessie Ware’s infectious summer single, “Tough Love” is like The Police meets Mariah Carey. In fact, a comparison to the latter wouldn’t be completely fair. Despite possessing an equally angelic vocal range, Ware is certainly forging her own terrain, using her exquisite vocal control to endow her melodies with an extra dimension of elegance and fragility. Like the tip of a chef’s knife gliding down a fluttering sheet of silk, its delicacy is almost overwhelming. Coupled with its crisp, loose production style and new wave synth riffs, listening to Ware sing about the pangs of love is like sipping summer down through a straw.

Moira Madden
Nicky Minaj – “Anaconda”
Ladies, clutch your pearls! I decided “Anaconda” by Nicki Minaj was my favorite summer song when I heard the line “He toss my salad like his name Romaine.” I also like anything that gets people talking, even arguing, about sex, culture, and values. The music video for “Anaconda” got 19.6 million views within its first day of going live. In the song, Minaj samples “Baby Got Back” and reframes the track through a woman’s sex life and perspective. I honestly think Simone de Beauvoir would have liked this song. Ariel Levy, a truly problematic fave of mine, once said that “Sex is one of the most interesting things we as humans have to play with, and we’ve reduced it to polyester underpants and implants. We are selling ourselves unbelievably short.” I believe that the key word here is “play.” Nicki Minaj has proven herself to be an incredibly articulate and talented role model, rapper, producer, and beauty queen. Sex should be considered with gravity, with intersections. But if your feminism has no room to “play” with sex anymore, then you’re going to miss out on some fabulous, truly fun music like this—if you have written Nicki Minaj off as just playing, you’d never have noticed how diabolically gifted she is.

Runner-up songs this summer: “Love U Forever,” – Jenny Lewis, “Fantasy Fools,” – The New Pornographers, “She Came to Give It to You,” – Usher ft. Nicki Minaj, “Let Me Be Mine” – Spoon

Cliff Parks
Chromeo – “Jealous (I Ain’t With It)”
Most of the music this summer was fairly terrible, but Chromeo saved the day with this breezy and satisfying synth funk jam that’s as 80’s and deliciously Rick James as you can get. And because Rick James is a patron saint of our city, it’s kind of like, our song.