Bold Folly – I Think That It Is Wonderful 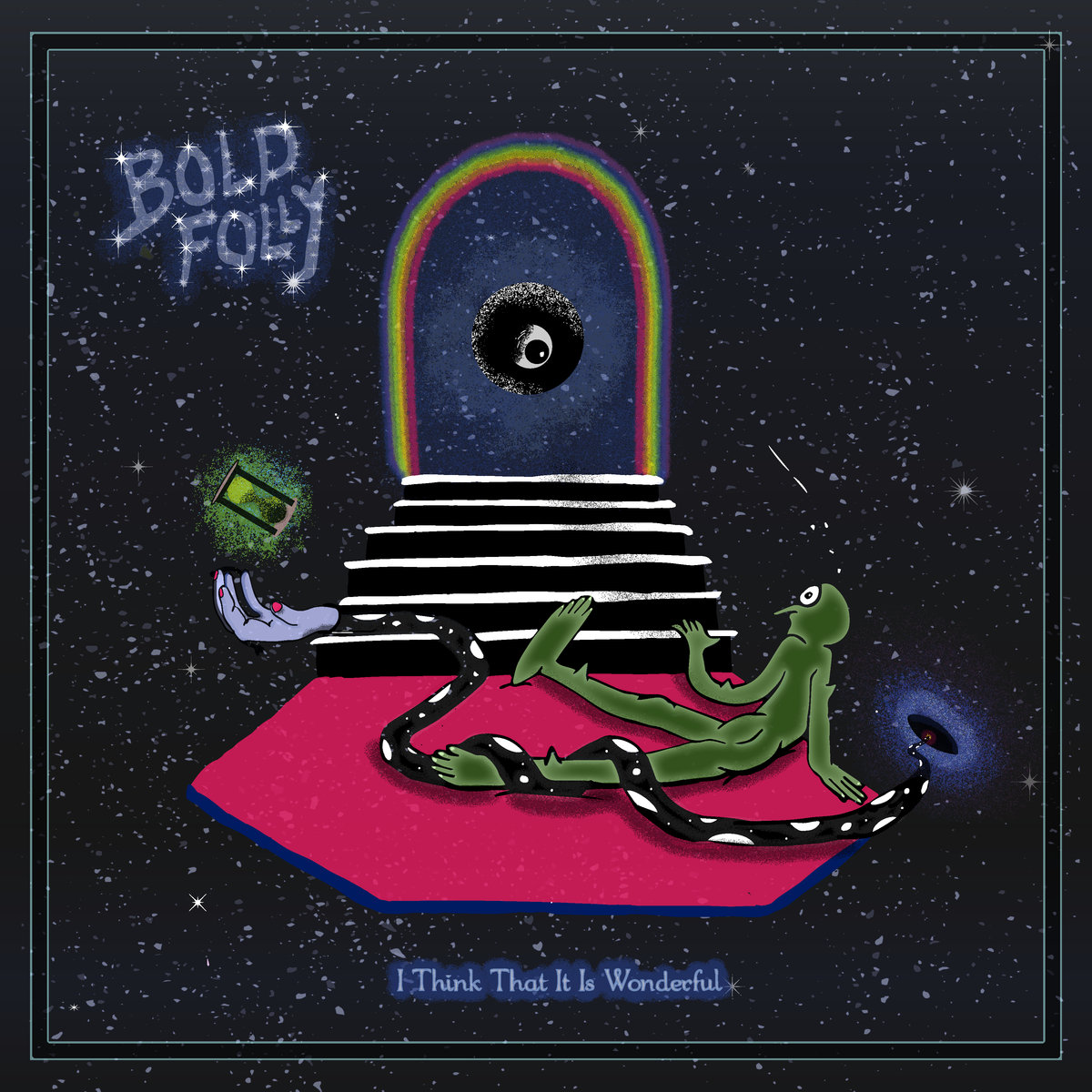 Forget the surreal cosmic expanse on the cover of Bold Folly’s I Think That It Is Wonderful– the key setting of the album is far more cramped: the dirty mouth.

It’s an image that pops up at least twice, as far as I could decipher from guitarist and vocalist Timothy Zdrojewski’s shouted vocals.

“When I talk to taxi drivers, I talk real loud with food in between my teeth.”

“Stick your dirty fingers in the back of my hungry mouth.”

I’d bring those two lines into conversation with another seemingly innocent observation from “CAT,” which Zdrojewski screams at the top of his lungs:

“We all breathe the same air.”

Taken together, these lines imply the aesthetic universe in which I Think That It Is Wonderful lives – not the neverending cosmos, but inside a stinking mouth, a dank, dark space where the air you breathe is what someone else has just exhaled.

All of this is meant as a compliment, because it seems like the primary objective of Bold Folly’s restless noise rock is to deny the listener any comfort. Over the course of ten tracks (really, six proper songs and four brief interludes), Bold Folly seem determined not to let you relax.

Nearly every song is marked by abrupt shifts in tempo and feel that occur constantly and without warning, threatening but never breaking the flow of the music. Both Zdrojewski’s guitar and his voice rarely hold a single, tuneful note for long – every melody is slightly warped and bent. Drummer Brian McKenna, meanwhile, seldomly locks into any consistent groove – he’s either pummeling his set twice as fast (and twice as loud) as you’d expect, or slipping into a lurching half time. The effect is a delirious seasickness.

There are a handful of obvious sonic touchstones for Bold Folly’s sound – the distorted voices and semi-sparkly guitar lines of opener “houses” bring to mind The Spirit of the Beehive, and Zdrojewski’s frenzied vocals and penchant for odd, often gross imagery (a dead cat that looks like a plastic bag, a wet dream in Nevada) recall Pile. Slightly more straightforward songs, like “buddapest” (the longest and best song on the album), sound inspired by “In Utero” era Nirvana.

Despite all that, I found myself thinking mostly of Cat Power’s “Nude as the News.” Though Chan Marshall’s arrangement is much sparer and her vocals are sung, not screamed, both her 1996 track and the entirety of I Think That It Is Wonderful ride the line between harmony and dissonance.

More than that, they spark an uncanny, enthralling sort of discomfort by placing the listener inside the dark, claustrophobic spaces of the body. For Marshall, that’s the womb, inhabited by preternaturally aware son, who is “dying to meet you.” For Bold Folly, it’s the mouth, crowded with days’ worth of chewed food and invaded by filthy fingers.

Bold Folly’s sound is their own, though, because unlike any of those artists, they rarely give the listener much quarter. Each left turn is followed by another and crescendos are followed by crescendos until they dissipate into feedback. For this reason, I Think That  It Is Wonderful is, above all, a physical experience, and should be listened to loudly, at a time that you don’t mind being punched in the face.