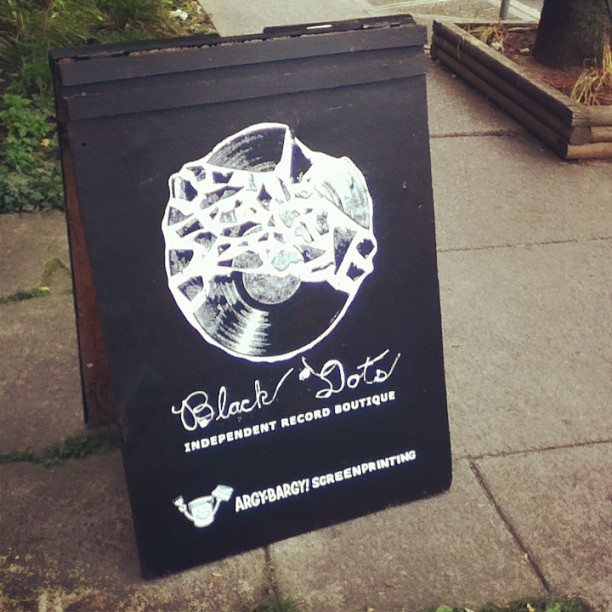 On paper, Smith should totally be Barry from High Fidelity. He’s been embedded in the underground scene in Western New York for years now. He’s shared the stage with members of Syracuse’s Perfect Pussy, among others. He knows about all of the bands you’ve never heard of, and can speak of them coherently and articulately. However, Smith is not that guy.

“So I’m going to be releasing this LP for this band Cages.” he tells from behind the counter. “Are you familiar?” he asks. I shake my head no, “Oh they’re awesome.” He goes to his computer looking for a song, he can’t find one. “Oh well,” he says, “They’re like this weird neo-folk, ambient noise music. The best band I’ve seen live in the last couple of years.” He goes on to describe to me the first time he saw them play at Sugar City’s metro show with Gas Chamber. Smith is all about community and sharing, so it’s no wonder he and his store have teamed up with buffaBLOG for his own Herd Fest showcase.

The Black Dots showcase will be taking place right at the store, on the corner of Grant Street and Lafayette (right across the street from Sweetness 7 Cafe). Just look for the chalkboard sign. On the bill will be Tied Down, a straight edge hardcore band from Buffalo. Black Dots have recently re-released their demos on cassette. Also on the bill will be Rotten UK. They’re from the UK by way of Rochester, NY. If Andy Kaufman had a band, this would be it. Rounding out the show will be the buzzing 90’s style indie act Newish Star and Smith’s own band, Vanilla Sex, which features members of Sperm, Hot Tip, and Thaals. Vanilla Sex is perfect for all the kids who just want to dance.

If you haven’t been to Black Dots yet, I recommend getting there early for two reasons. One it’s a small space, so it will fill up quick, and two, to buy some records. The doors for the showcase open up at 3pm, $5 bucks gets you into the showcase, or if you’re one of the cool kids, you can get in with your Herd Fest wristband for $20, which gets you into any showcase all weekend.