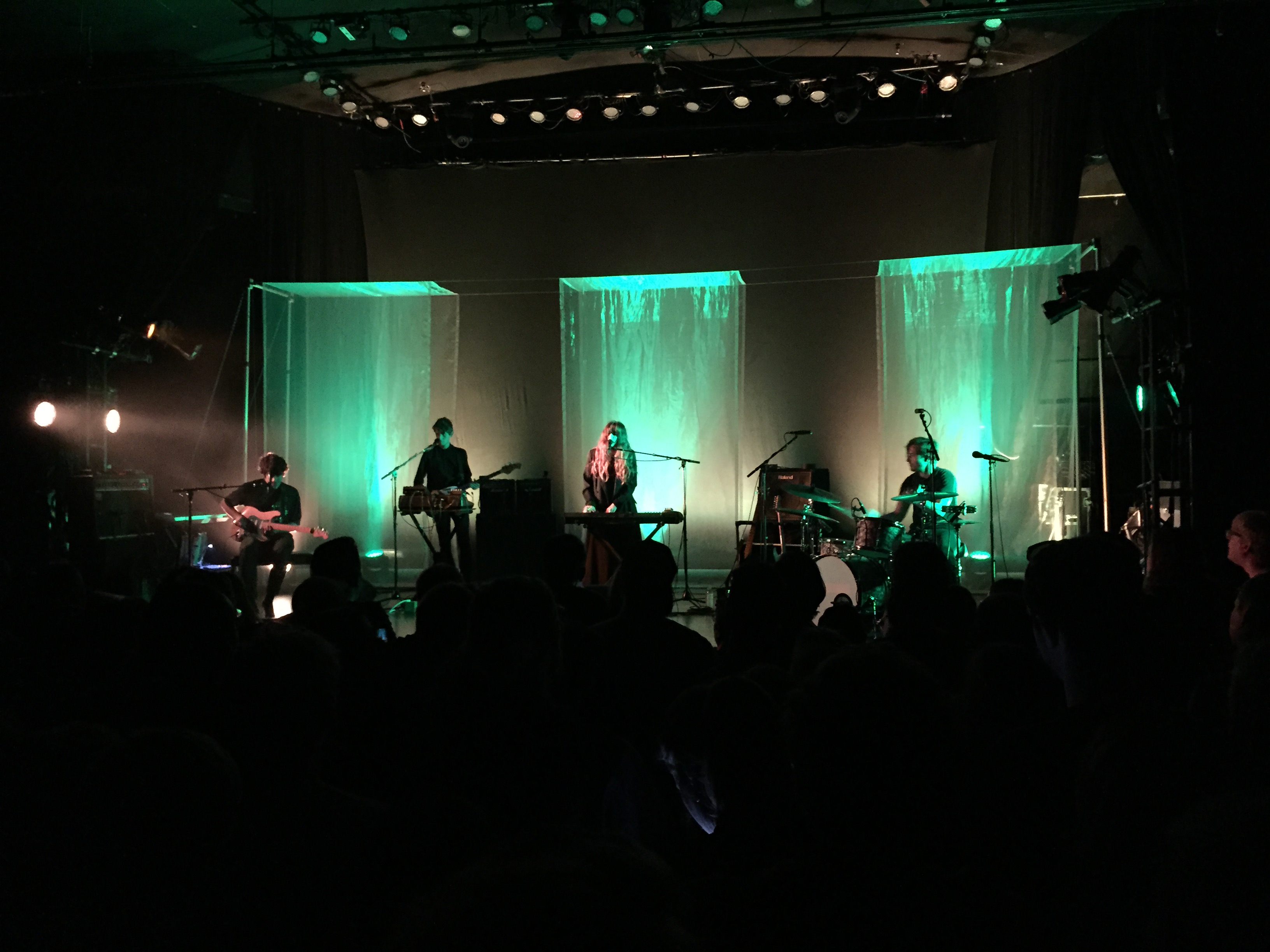 Whenever I’m writing a review of show, I always bumrush the stage to get a pic of the night’s setlist because writing it down in real time is a pain and it takes you out of the all important moment. But there were no setlists to be had last night after Beach House’s mesmerizing return to the Town Ballroom, and I knew I was in real trouble because piecing this show back together in my mind afterward would be nigh impossible. Like the best REM dreams, it feels like Beach House’s set basically just happened; while it obviously had a beginning and an end, between the unidentified new songs and gossamer vibe, everything else in between was beyond time. It was a pleasant sensation to float along with for the duration, but that means no setlist, only fragments.

After a bracing but brief opening set by Baltimore garage rock duo Romantic States that called to mind mumbling Michael Stipe early R.E.M. and Big Star, the scent of cotton candy filled the air (evoking the bubblegum scented Dan Colen exhibition at the Albright Knox), the lights dimmed,  and accompanied by a pair additional musicians, Beach House’s Victoria Legrand and Alex Scally got underway with two emotionally drenched songs off their forthcoming fifth LP Depression Cherry and “On The Sea” from 2012’s Bloom, immediately drawing the Ballroom into a hushed and reverential near silence.

Alas it wasn’t a complete silence because the sold out Beach House show brought out all the scenesters there more to be seen than to see the band, which meant there was extraneous talking going on everywhere. This of course becomes an issue when the band onstage is known for creating beautiful spaces between the notes and those spaces get filled by the conversations of posing audience members. These philistines with zero chill certainly did their best to try to kill the shared buzz; thankfully Beach House and their devotees persevered to keep the spell intact, and to our credit, I don’t think I’ve ever heard that many “shut the [redacted] ups” before at a show.

Weaving together a set emphasizing the last three iterations of Beach House – Depression Cherry along with 2010’s Teen Dream and 2012’s Bloom – the ethereal vibe being laid down onstage was total. New songs like “Sparks” and “Days Of Candy” sat perfectly alongside BH staples (classics) “Silver Soul,” “Walk In The Park,” “Norway,” and “Myth.” While the jury seems to be out on the merits of Depression Cherry and whether Beach House needs to change up their sound, the satisfying completeness of the overall show experience and it’s rapturous response suggests that their local contingent of die hard fans enjoy Beach House being Beach House.

Case in point: the raucous and genuine din generated by the crowd during the interregnum before the encore, a pulsating and apocalyptic “10 Mile Stereo” was the loudest I’ve heard at the Town Ballroom in a long time. The passionate crowd, much larger than the one present for their last show here five years ago, proved to be an almost ideal audience (minus the accursed talkers) for playing songs off an album not out for another week. Baltimore might indeed be Charm City, but the Queen City is not without allure. Earth goddess Victoria Legrand even suggested as much, joking that she might retire here to hang out in our “dingy corner bars.”

But like any dream, the show inevitably had to end, and once the house lights came on to extinguish hopes of another encore and the  wonderful reverie, flushing the satisfied crowd into the beautiful Buffalo evening to ponder the glorious event we’d just experienced. Five years between Beach House shows was too long for the soul, and hopefully the next time comes sooner.