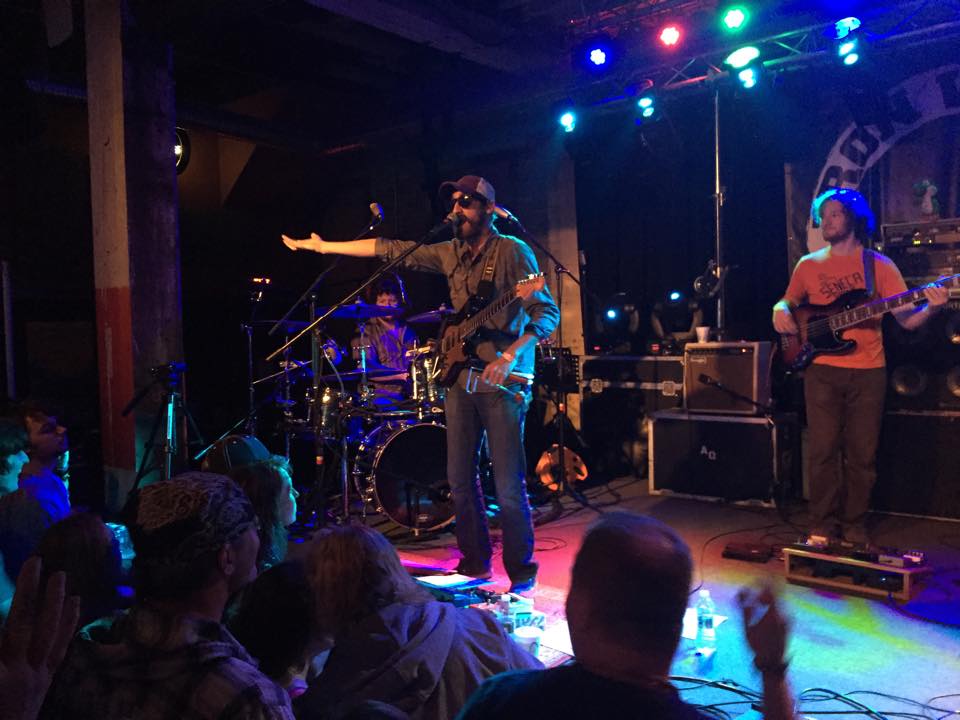 Aqueous returned to Buffalo, the city they call home, for an energetic sold out crowd at Buffalo Iron Works last night.

Last November, I made the mistake of telling guitarist Mike Gantzer that as far as “jam” bands go, I could really see Aqueous climbing to the top.  He said “Thanks man, but we’re not a “jam” band.  We’re a ‘Compositional Groove/Rock’ band and that’s the style we’re going for.”  After a few Heady Toppers at Burlington’s infamous Nectar’s, hearing this really threw me for a spin.  After a little time to  process what Mike said, it made perfect sense.  Regardless of how you might classify Aqueous, they fucking jammed hard last night, and the crowd reacted.

The band heralded the night as “Aqueous does Cake” or as fans immediately coined “Cakequeous.”  With an opening set of exclusively originals, the band kicked off with “Underlyer” and “Complex Pt. 1.” The two juxtaposed highlight the evolution of Aqueous’ sound over the last few years.  The group then pulled out “Marty,” a catalog classic that has resurfaced more frequently as of late.  The colossal selection for the first set was an early and powerful “Kitty Chaser (Explosions)” that really locked in the crowd for the rest of the night.  Before that though, “Back on You” was debuted offering a notable “Shine on You Crazy Diamond” tease. The band grooved on “Kitty Chaser” bringing some of the highest peaks of the night, then seamlessly transitioned into “Triangle” to close the first set.

After the set break, a change in set up on stage had become noticeable. The band introduced Amherst native Harry Glaser on stage to play keyboards and a little percussion. They kicked off with Cake cover “Sheep Go to Heaven” and this whole “Cakequeous” thing became a reality while smoothly transitioning into original “The Median” and right after that, back into another Cake cover, “Hem of Your Garment.”  The chorus “Shut the Fuck up, shut the fuck up, learn to buck up” had everyone, laughing, cheering, and joining Ganzter as the tune continued. Without stop, they continued on to Aqueous original “Origami,” which even the stiffest in the crowd couldn’t help but move their hips to.This trend continued throughout the second set: Aqueous into Cake, and back into Aqueous, feeling at times as if it was one great composition, rather than individual songs.  Set closer, “End of the Movie” featured drummer Ryan Nogle on accordion. Gantzer admitted to the audience that no one in the band knew Nogle could play the accordion until a few days before the show. He killed it.

For an encore, Cake would again triumph. “Short Skirt Long Jacket” satisfied all of the Cake die-hards, and “The Distance,” performed by Nogle, was electric and ended the show on a very high note.

At the end of the night, Ganzter thanked everyone for sticking it out until well after 2am. He also promised “very big news.”  As to what that news is, only time will tell.