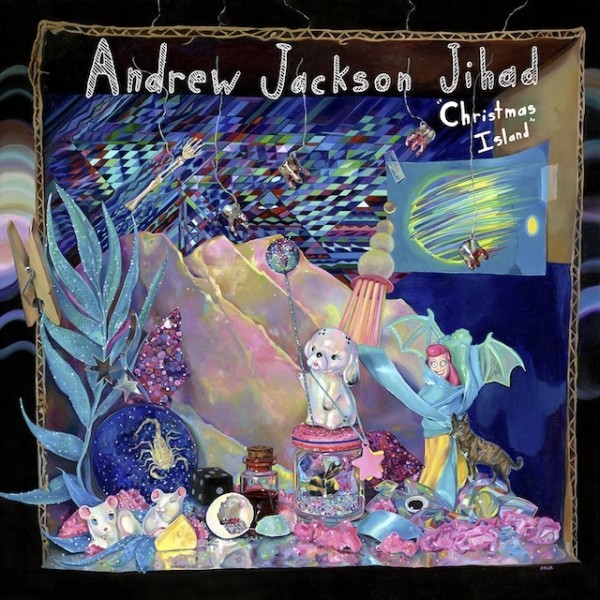 Andrew Jackson Jihad is the type of group that can make you want to laugh and cry at the same time. Their lyrics are undeniably witty and hit you with a punch, and after settle in with a pinch of reality. Christmas Island, their latest album-length release, is both cryptic and hard-hitting. Lyrically, the words resonate on a dual plane, touching on the beautiful and the ugly. Musically this album stands in line with their previous work, exploring more accompaniment but still following suit in a folk-punk tradition.

“Temple Grandin,” the opening track, sets the tone for the rest of the work. Sean Bonnette’s voice comes off sounding more broken and exasperated than usual as he chimes the words, “open up your murder eyes and see the ugly world that spat you out.” It’s set in a lo-fi stage without bleeding together the separate components. In the backdrop, the organ jousts and pounces. This album’s focus is a bit more depressing than the others, mostly because it is so accurate. Our world is in a state of crisis, more or less. Media frosts most of this over by overdosing the public with so much information from various sources that it becomes overwhelming. Toward the end, “find a nice way to kill it” revs up until it bursts into the second track, “Children Of God” that sings about children eating bowls of angel hearts. Some of their content can verge on sensationalist, just like the society they condemn and mourn.

Separate from their previous albums that are more acoustically driven, the tracks “Deathlessness” and “I Wanna Rock Out In My Dreams” have another element involved. “Deathlessness” changes the vocals into a pinched, low tone that sounds like he’s shouting through a muffled recorder. The second song is sung over a velvety blend of organ and violin that creates a sensitive mood, building into an anthem for the close.

“Getting Naked, Playing With Guns” and “Kokopelli Face Tattoo” are the highlights of the work, and opposites in several ways. The first turns down the notch on vocal intensity, trading in a harsh, fat guitar sound for a light, acoustic rhythm. The lyrics are comical, “we’re building a bomb, we’ll set it off like Microsoft in ’94” and “McDonald’s playplace before the X-Box.” They’re skipping back into time and catapulting us back into the present. “Kokopelli Face Tattoo” spearheads a full, thick sound. The vocals are anxious and the lines seem to spit out at  you, “Hating you won’t make you suck any less.”

Christmas Island is yet another golden nugget in the extensive roster of Andrew Jackson Jihad’s collection. It’s spirited, tongue-in-cheek, and well worth a few plays to catch the full effect of their wide-ranged wit.