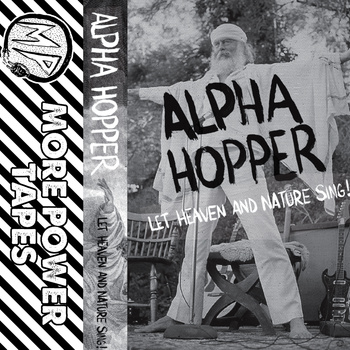 The title of Alpha Hopper’s Let Heaven and Nature Sing hints at harmony and order, and despite the fuzz and the dissonance, the album churns like a fantastic machine, pistons and gears lifting and pulling in sync.

The two main drivers: the jagged, restless guitar work of John Toohill and Ryan McMullen and the stressed-out, frustrated vocals of Irene Rekhviashvili.

Drummer Doug Schneider is no slouch either, holding things together behind the noise. But it’s the interplay between Rekhviashvili’s strung-out shouts and the guitars’ driving crunches that gives Let Heaven and Nature Sing much of its character.

Take opener “Western Walk.” It starts off with an uneven stomp of a guitar riff which mimics the heavy steps of a drunk on a mission. Before your ear can adjust to the rhythm, Rekhviashvili comes in with her own off-kilter croon, filling spaces you didn’t even realize were there, drawing out and twisting her vowels as she sings “She’s so, she’s so fine/She’s all, she’s all mine.” Her vocals are countered, in turn, by building, wailing leads from the guitars.

Most the songs follow this format. One element fits in with another, then another is introduced, then another, until you’re faced with a syncopated wall of sound which lets off just before you’re crushed completely.

“Yes, Dan,” you might be saying. “That’s how music works: the parts fit together.” You’re exactly right. But it’s rare for releases as noisy as Let Heaven and Nature Sing to also be so well-arranged and well-realized from start to finish.

The album’s high point comes square in the middle, with the one-two punch of “The Sea” and “B.O.B.” “The Sea” is perhaps the most dynamically and sonically ambitious track on the release, as well as the longest. It kind of sounds like a ship lost at sea, stuck in a storm, in fact. The guitars pound, pummel and strut while Rekhviashvili stands at the prow, shouting into the fury. And once the storm finally subsides, she begs, in a fit of true mental instability, for its return: “Like the waves that crash into the sea/come back for me.”

While “The Sea” takes the cake for character, “B.O.B.” shines for pure catchiness. There’s something about the precision with which Rekhviashvili delivers the opening lines and the chorus juxtaposed with the Valley Girl sneer of the outro that makes “B.O.B.” the song most likely to get stuck in my head. But it’s all good, loud, warbly and weird.