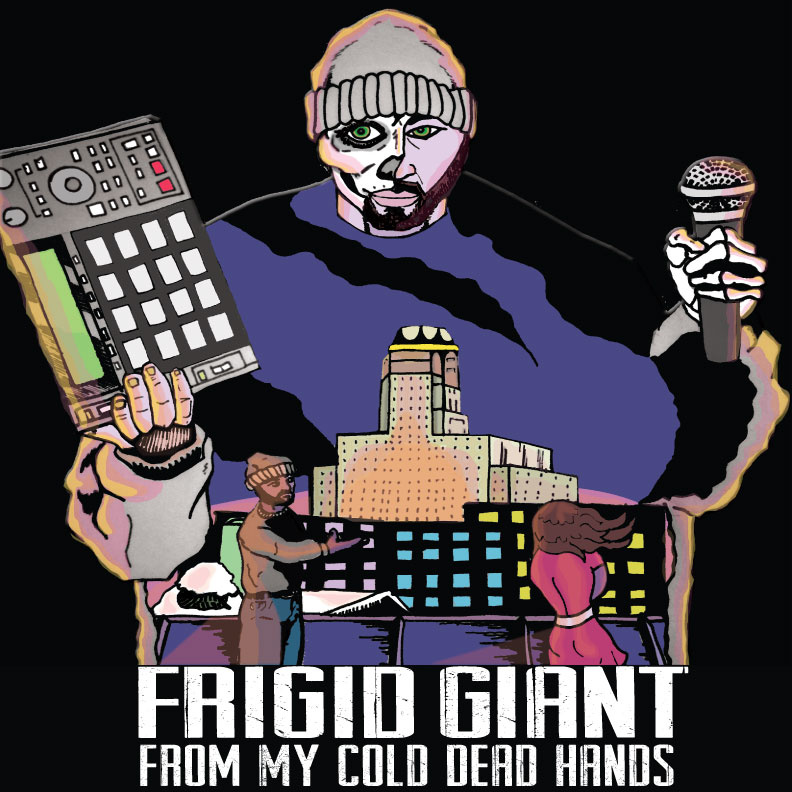 This past weekend, Buffalo rapper Frigid Giant held the release party for his excellent new album From My Cold Dead Hands. Those who attended that show have a vital recording of one of the freshest voices to emerge on the Buffalo hip-hop scene. Throughout its 42-minute running time, From My Cold Dead Hands is packed with witty, conscious lyrics, and well-produced beats with a futuristic sound that points to hip-hop’s next wave. It’s a brilliant record all around.

A big part of Frigid Giant’s charm is the ability to mix bravado with self-deprecating humor. While he often boasts about his skills as an MC (he can definitely back these claims up), he also is quite honest when he jokes about sleeping till noon and being broke. Our narrator is aware of his considerable talents and his not shy about his ambitious. But he also acknowledges that for now, as he’s as hungry as every other struggling kid out there. This openness makes him more relatable, and his boasts more charming.

The album takes its title from Charlton Heston’s infamous NRA speech from roughly 20 years ago, and while the album doesn’t necessarily skew liberal or conservative, it does not shy away from political themes. The most explicitly political track on From My Cold Dead Hands is “God Loves, Man Kills,” which is a sharp critique of the decline in U.S. journalism, and the lack of serious investigative reporting against the government. Any one who saw the reprehensible report on the NSA scandal on 60 Minutes last year, in which they were more or less delivering government propaganda, could share the anger expressed here. The politics here don’t necessarily express a given ideology, but rather a frustration that no one is telling us the truth. Folks on both sides of the aisle could likely relate the anger here.

Not every track is political, however. “Chance Encounter” tells the story of a female friend in abusive relationship, and the downward spiral she falls into as a result. Elsewhere, Frigid Giant deals with the struggles of being a local rapper and arguing with promoters, making good usage of a Joe Pesci sample on the “How To Deal With Promoters” skit. Frigid Giant deals with a variety of topics, but never loses his sharp lyrical edge.

This a strong statement from an artist with a very bright future. Frigid Giant delivers witty, thoughtful lyrics with a thoroughly confident flow, while the beats and production are crisp throughout. Frigid Giant is one of our city’s most talented young MCs, and he’s going to have a great career. Now would be a great time to get in on the ground floor, and say you knew about him before the rest of the world caught on.