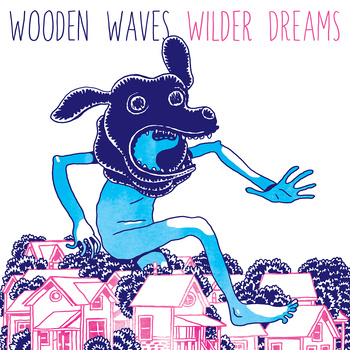 It’s a cliché to say that a band’s latest release shows “signs of maturation.” On one hand, it usually doesn’t mean anything: you’re just saying they’re older than they were yesterday. On the other hand, it makes an incorrect assumption about progress. It implies that the band was one thing yesterday, is something else today and is working towards becoming some perfected version of itself in the future. This kind of assumption might give us a framework for making sense of things, but it’s not actually how reality works. Seeds grow, fruit ripens, but bands? People? They change, but there’s no perfect end point to work towards that is more valuable than the present.

Accepting that realization is closer to maturation than the acquisition of any object or the accomplishment of any goal, and the struggle for that acceptance is at the heart of Wooden Waves’ Wilder Dreams (One Percent Press). The songs are catchy, the release show was tons of fun, but that doesn’t take away from the fact that the album is a serious statement.

Wilder Dreams kicks off with “It’s Only Sky,” in which Wooden Waves more or less kills God. There’s an immediate, reckless energy motivated by a burst of drums and guitar. Then the instruments cut out as the band sings “All this talking about levitation/we may find ourselves off the ground.” It feels a little bit like levitation, but a whole lot more like your stomach pushing up into your skull as you crest the top of a hill on a roller coaster.

In this exhilaration, Ray Fulton asks a few questions: “Can we live without these institutions… can we pay no mind to this ideal of an eye in the sky?” And wisely, he doesn’t set out to answer them. The album is much more relatable for the fact that it doesn’t propose a solution for all of these quandaries. It isn’t about figuring it out; it’s about coming to terms with the fact that you’re never going to figure it out.

The most striking achievement here is that Wilder Dreams stays this good and this interesting all the way through. Both musically and thematically, it’s totally coherent, with all ten songs adding up to something greater than the sum of their parts.

Of course, there are some definite standout moments. “My Fiend at Night” will probably be stuck in my head until the day I die. “Big Wheel” grapples with brain drain and civic unity and contains my favorite line on the album: “1993, it was a secret year for me/Secrets all around, who let my secret out?” “Welcome to Summerfeldt” touches on anxiety, with the speaker looking at chewing and seeing only choking, swimming and seeing only drowning.

But it’s the title(ish) track, “Blue Gene’s Wilder Dreams,” that feels like the key to the whole thing to me. Ray Fulton sings:

The past, the “memory,” can’t be relied on. Your accomplishments and your best moments, no matter how much fruit they might have borne for you, can only sustain you for so long. The law of diminishing returns comes for everything eventually.

And the future? You can work as hard as you want trying to “build your heaven,” and you might even get somewhere with it. But you’re not going to succeed. You can’t build a perfect life, and even if you could, it would fade over time just like anything else.

It’s a thematic callback to “It’s Only Sky:” you can fixate on these transcendent things that seem like they might give your life meaning (the eye in the sky, the institutions, the goals that you can achieve in order to create the life you want), but you’re fooling yourself. The past is nothing but a fading memory and the future is a nonexistent heaven. All you really have, and have ever had, is the present, a moment which stretches from this point on until it’s over.

That all sounds kind of morbid and heavy, but it isn’t, and neither is the album. It’s freeing. It enables you to take things exactly as seriously as you should. If you can hold on to that idea (which is about as slippery as they come), you can enjoy what’s in your life not for the abstract potential it has to bring you closer to happiness, but for the happiness it actually brings you. To steal a phrase from Lauren Berlant, the things and people become less like “clusters of promises” and more like things and people.

And I’m certainly projecting a little bit, mostly because I want it to be true, but Wooden Waves might just be on some higher level with that. You could see it in the way they played at their release show. With some bands, you can look in the members’ eyes and see the concentration and the planning as they get ready for their next move: chord change in two measures, then hit your distortion, bend your notes and don’t forget to keep bobbing your head and looking grim.

Wooden Waves, on the other hand, was totally in the moment and totally in sync. There’s a cliché about relationships that rings true here. An ideal relationship isn’t two 50 percents coming together: it’s two 100 percents. Wooden Waves looked like 500 percent, and they were having a blast. Example: there was a moment when Ray’s microphone cut out. I’ve seen singers stop songs and basically throw temper tantrums over stuff like that. Instead, Joey slid over, leaned in with his mic, and they both just sang their guts out together.

You can hear that dynamic on the album. Wilder Dreams is one of the least pretentious, most enjoyable, most natural sounding albums I’ve heard in a while. It sounds like these songs just came into being, easy as breathing. And though it’s hard to pinpoint exactly why, it sounds totally unique, like Wooden Waves were the only people in the world who could write and play songs like these.