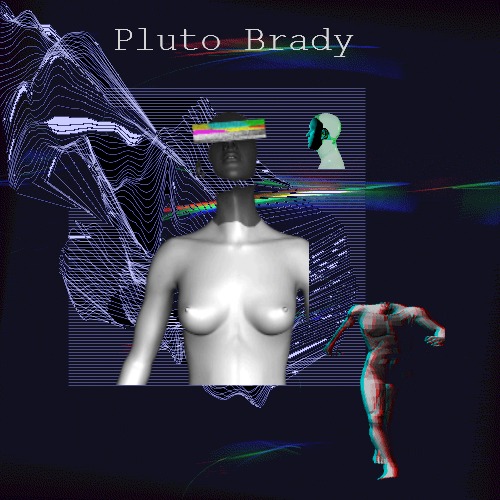 Rochester producer Pluto Brady balances hazy, melodic textures with sinister elements of trap, bass, and hip-hop on his self-titled debut beat tape. The 18-year-old artist  has been previously credited for tracks on rapper Donzelly’s DMS mixtape as well as Black Kray’s Goth Luv mixtape and various other MCs. Bringing to mind producers like Clams Casino, Ryan Hemsworth, and Suicideyear, Brady’s instrumentals place emphasis on slow paced, patient melodic builds, making for an immersive experience that reveals new layers with each listen. Throughout the tape’s eight tracks, the vibe ranges from ethereal, reverb-laden hip hop on tracks like “Without You” to futuristic r&b on “I Don’t Know What to Say.”

The lush “Alone Forever” starts off the collection with a captivating hybrid of menacing trap -inspired percussion and fluid melodic synth swells behind a soulful piano riff. “Internet Eyes” builds around a similar style of elegant keys, but heads in a slightly darker direction, with hard-hitting drums and a reflective synth line that emerges through the dense, atmospheric samples to make for one of the most balanced, complete sounding tracks of the collection. Other tracks such as “Think Like Me” and “Suburbs” hint at more analogue, groove-based approach, bringing to mind the work of synthpop artist Com Truise with their driving basslines and sprawling, layered melodies.

The young producer gets ambitiously experimental on “Death Song,” taking a vocal snippet from Jhene Aiko’s “The Worst” and warping it beyond recognition to achieve an eerie, post-apocalyptic effect. Using a similar effect on “Without You”, the tape’s most ambient work, the rich soundscape is blurred allowing the slow rolling, crisp drums to be placed atop the aqueous melody. The closing track, “YESHUA,” once again displays the artists range, setting up a trap feel that breaks for synth heavy breakdowns that make the sound challenging to pin down as belonging to one influence. Pluto Brady delivers a compelling range of styles and homages to various traditions within electronic music and grows more rewarding with each listen. As the wave of internet/digital culture-as-muse artists dubbed “cloud-rap” continue to emerge and present their kaleidoscopic vision of hip hop, albums like this provide a refreshing interpretation of a genre where individuality and eclecticism are at the forefront.