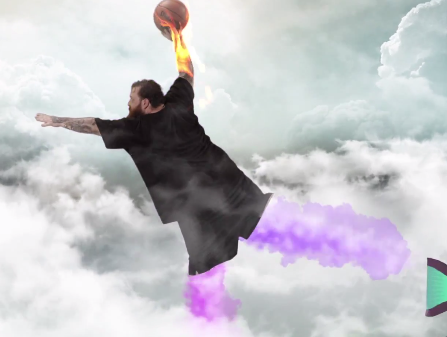 Queens MC, Action Bronson, is larger than life in every sense of the word. His music video game is always on point, and it’s not a stretch to say that he could be the best in the game as far as visuals are concerned. Themes have ranged from action movies to Westerns, but every time a Bronson video drops, you know it’ll be entertaining, and you know that the big guy is probably going to try to show off his mobility. This time though, Bronson lets the green screen do the work for him, in a cheeky video for recent single, “Actin’ Crazy.”

Between scenes of him blasting off in computer-generated rocket ships and using Super Saiyan-like flying abilities to dunk a flaming basketball, the green screen returns to standard green, and Bronsolino gets the behind-the-scenes luxury of lint-rolling females taking good care of his black v.

The song itself is one of Bronson’s best. Produced by Drake’s main man 40, the beat is a little out of character for both 40 and Action, but it works. Playful and plodding, it provides the framework for Bronson to drop those hilarious lines we all love, like “All I do is eat oysters, and speak six languages in three voices.” A strong track in lyrics, production, and now video, “Actin’ Crazy” is a great single for Action ahead of his major label debut, Mr. Wonderful, out March 24th. Watch below.