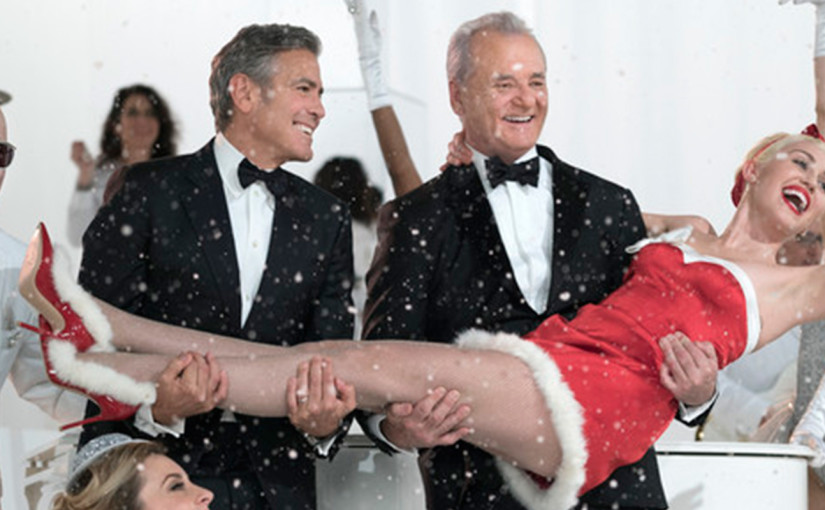 The A Very Murray Christmas special on Netflix is one of the greatest pop culture artifacts ever produced, and potentially the apex of human civilization. Crafted by international icon/spirit animal Bill Murray, Mitch Glazer and director Sofia Coppola for streaming whenever you like, it is an instantly classic one offmedia masterpiece that transcends film, television, and reality itself. Featuring preposterously bravura performances  from a multitude of talents that are soulfully beautiful, yet ironic without a trace of irony, it’s ridiculously heartfelt and brilliant. There, I said it.

And the musical numbers supervised by Paul Shaffer are sublime from start to finish: the very first number “Christmastime Blues” featuring Bill with Paul at the piano in his suite at the Carlisle Hotel before Bill’s ill-fated live TV holiday special instantly recalls Nick the Lounge Singer while setting the slightly melancholic mood; a duet in matching Andy Williams sweaters of Bill and Chris Rock of “Do You Hear What I Hear” is simultaneously hilarious and religiously somber. After retiring to the hotel bar to get their drink on after a blackout scotches the live TV special, Bill’s alleged beau Jenny Lewis shows up to do a “Baby It’s Cold Outside” with Bill that that smolders with gentle humor and raw sexual attraction; and Phoenix gamely pops out of the Carlisle’s kitchen in chef outfits to perform an impeccably tasteful and affecting cover of The Beach Boys’ “Alone On Christmas Day” with Buster Poindexter and Jason Schwartzman on drums.

Then Maya Rudolph shows up like the American royalty she is to perform “Christmas (Baby Please Come Home)” with Paul at his ever present piano and a trio of back-up singers giving it their absolute best Ronettes that’s as gospel as it is Spectoresque. After some counseling by the sage Bill, almost newlyweds Jason Schwartzman and Rashida Jones lead everybody in the Carlisle’s bar in an emotional sing-along of Todd Rundgren’s “I Saw The Light” before a robust, surreal, and equally emotional “Fairytale Of New York,” featuring Buster Poindexter, Jenny Lewis and Bill before he “passes out” from drink only to “wake up” on a soundstage in Queens for some big studio numbers with America’s sweetheart Miley Cyrus and “citizen of the world” George Clooney.

And then it gets really weird. Miley, currently shocking the Eastern seaboard and the media while on tour with The Flaming Lips, gives us a glimpse of her possible future, beautifully and soulfully performing a trio of traditional holiday classics like a young Dolly Parton or Barbara Mandrell, if they were slightly androgynous pixies. Meanwhile, Bill , George, and the big studio band bring the corporate funk with a hilarious and ribald “Santa Claus Wants Some Loving” that has to be seen to be believed. Bill’s funky vamping is one thing, but Clooney’s contribution is one of the funniest things I’ve ever seen.

By the time Bill comes to in his suite at the Carlisle (with Paul still dutifully manning the piano, and concierge Andre at the ready) to end the special with a poignant and Charlie Brownesque “It’s Christmastime” with Bill balefully wishing everybody a “Merry Christmas” through the window before the fade out to black, everything is right with the world. In eschewing the broad strokes and shmaltz of the old time holiday specials that they’re honoring in favor of a more keenly observed, aware, and wry series of miniature character studies and sharply curated music numbers, Team Murray succeed in crafting an exquisitely heartfelt pop culture memento for the ages.

A Very Murray Christmas is available for streaming on Netflix. Proceeds from the 7″ inch and digital single for “Alone On Christmas Day” featuring Phoenix, Bill Murray, Buster Poindexter, and Jason Schwartzman go to UNICEF.