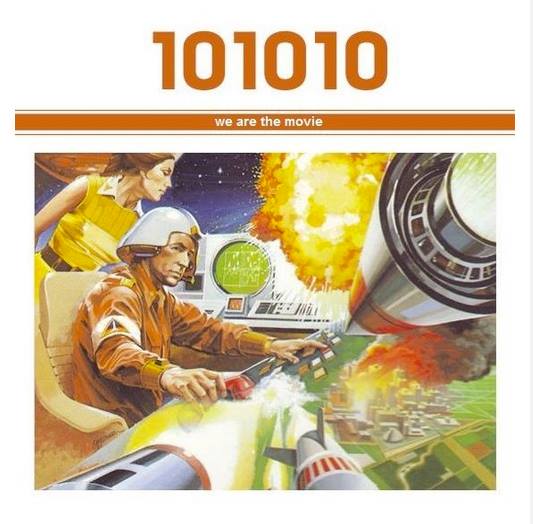 Another month, another farewell album. Listening to an album known to be a band’s last is always a bittersweet experience, and 101010’s We Are The Movie was no different for me. The Buffalo band, having formed in 2012 from the ashes of Americana act Vox Humana, are no longer playing together, but, as a final gesture of good faith, decided to digitally release their swan song album for the fans of their decidedly post-rock loudness. Each of the respective members will be focusing on different projects beyond 101010’s dissolution; keep your ears to the ground. Though the curtain has called for 101010, We Are The Movie satisfies, and should not go unrecognized. Enter our Album of the Week.

We Are The Movie explores the various intricacies of post-rock and shoegaze, landing somewhere between the cosmic thickness of 90’s band Hum and the hard-hitting fervor of Chevelle. But the album doesn’t rest on the legs of a solitary sound, and is exceptionally dynamic. Walls of sounds are built and are crumbled before our ears, reduced to delicate sonic pebbles, only to be built right back up again. 101010 takes songcraft to a poignant extreme, and We Are The Movie hits home heavily.

Album opener “Only Zuul” airily weaves an arsenal of delicate guitars before swelling into an emotional explosion of tangible urgency. The choruses hit hard and heavy, and then float back down into the feather-like verses. The vocals are smooth and powerful, fitting right in with the dynamic range of the album’s eight tracks. Other album highlights include the whammylicious stroll and hooky choruses of “Parts Per Million,” the sonic tidal wave and subsequent tsunami at the end of “Cloud Chasers,” and the instrumental dream-state of “Tea With Bertrand Russel.”

We Are The Movie, as a whole, is a solid post-rock effort that fills the void just as easily as it tears it open. 101010 brings the volume with their last album, all the while remaining conscious of necessary dynamic changes that make each song so poignantly appropriate. Check out “Parts Per Million” below and be sure to visit the band’s Soundcloud page to stream the album in it’s entirety.